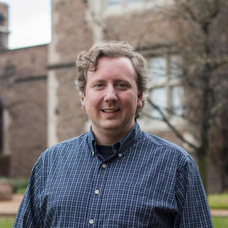 The Geochemical Society and the Meteoritical Society are pleased to announce the appointment of Jeff Catalano, Professor of Aqueous Geochemistry and Mineralogy at Washington University in St. Louis, as the next Executive Editor of Geochimica et Cosmochimica Acta. He will succeed outgoing EE Marc Norman, whose six-year tenure has been marked by steadily rising submissions and impact factor for GCA. Prof. Catalano's term will officially begin on 1 January 2019.

Jeff Catalano completed his undergraduate degree in geology at the University of Illinois at Urbana-Champaign in 1999. During his final two years of study, he also worked for the Water Resources Division of the U.S. Geological Survey. Jeff's graduate work was conducted at Stanford University under Prof. Gordon E. Brown, Jr. and focused on synchrotron applications in environmental geochemistry, with his Ph.D. awarded in 2004. Jeff next moved to Argonne National Laboratory where he was the Harold Urey Postdoctoral Fellow for three years while working with Dr. Paul Fenter. Since 2007 Jeff has been a faculty member in the Department of Earth and Planetary Sciences at Washington University, where he is currently a professor of aqueous geochemistry and mineralogy.

Jeff's initial research focused on mineral-fluid reactions controlling the fate of inorganic and radionuclide contaminants in the environment. His current research program now spans the areas of environmental biogeochemistry, planetary geochemistry, and geobiology. Active projects in Jeff's group investigate: (1) trace metal fate during iron and manganese oxide mineral transformations, (2) the properties of interfacial water near mineral surfaces, (3) microbial utilization of Fe(II) in trioctahedral clay minerals as electron donors on the early Earth, (4) oxidation of iron on Mars by oxychlorine species, (5) redox-driven recrystallization of lead and uranium oxide minerals, (6) clay formation and alteration on Mars, and (7) trace metal limitations on methanogenesis, denitrification, and Hg methylation in freshwater aquatic systems. Nearly all of these projects are collaborative in nature and are carried out by a group of intelligent and hard-working graduate students and postdocs.