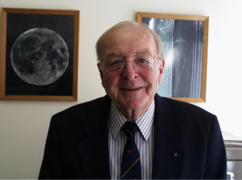 Stuart Ross Taylor, Goldschmidt Medalist (1993) and Geochemistry Fellow, passed away in Canberra, Australia on May 23, 2021, surrounded by family. Ross was a geochemist who made seminal contributions to our understanding of the origin and evolution of Earth's continental crust, and the composition and origin of the Moon, meteorites, tektites, and the solar system. Born in Ashburton, New Zealand in 1925, he received a BSc and MSc Hons from the University of New Zealand followed by a PhD in 1954 at the University of Indiana, USA, where he studied under fellow Kiwi Brian Mason. Taylor was Mason's only PhD student and Mason himself was the last PhD student of Victor Moritz Goldschmidt. Following his PhD, Ross became a tenured lecturer at Oxford University where he worked with Louis Ahrens and built an emission spectroscopy laboratory. There he met Noël, the love of his life, who was working on organic crystallography with Dorothy Hodgkin. They married in 1958 just before Ross accepted an appointment as a senior lecturer in geochemistry at the University of Cape Town, South Africa, where he began his work on the origin of tektites, mysterious glassy droplets found strewn over large regions of Earth. In 1961 he was recruited by John Jaeger to the ANU as a senior fellow in geophysics and in 1962 became a professorial fellow in the Research School of Earth Sciences where he spent the remainder of his career. At ANU he set up an emission spectrograph and later a spark-source mass spectrometer to analyze trace elements at unprecedented detection levels and precision. There he continued his work on tektites, establishing that they are terrestrial in origin and generated at meteorite impact sites. Shortly thereafter, Ross was invited to join the preliminary analysis team for the Apollo 11 and 12 missions and he produced the first geochemical analyses of lunar return samples. Ross went on to become a world expert on lunar composition and origin. He also focused his spectrometers on terrestrial samples such as andesites and sedimentary rocks, developing the andesite model for crustal origin and defining the composition of the upper continental crust through the analyses of terrigenous sediments (shales and loess). Over his prolific career Ross published more than 240 papers and nine books. He received a myriad of honors, including the Goldschmidt Award of the Geochemical Society, the Leonard Medal of the Meteoritical Society, the Bucher Medal from the American Geophysical Union, election to Australian Academy of Sciences, foreign associate of the US National Academy of Sciences, Companion of the Order of Australia, and the naming of asteroid 5670 Rosstaylor. Despite these lofty accomplishments, Ross was always humble and kind and widely loved by his students, post-docs, and colleagues. A student of history, he always had interesting historical anecdotes to share, as anyone who has read the footnotes in his books will know. Ross is survived by his wife of 63 years, Noël Taylor, daughters Judith, Susanna, and Helen, grandson Angelo, and son-in-law Michael.