The Geochemical Society's founder, Frederick Earl Ingerson (1906– 1993), was a seminal figure in geochemistry. He is remembered today by the Ingerson Lectures, delivered at the Goldschmidt Conference as a means of honoring his significant and enduring contributions to the field of geochemistry. More than 60 years after he helped launch the GS, we look back at his legacy.

Ingerson was born in 1906 in Barstow, Texas (USA), a town in the rural western part of the state with fewer than 1,000 inhabitants. He earned his BA in chemistry and MA in geology from Simmons University (USA) before going to Yale University (USA) to complete his PhD in geology in 1934.

As an early career scientist, he joined the staff of the Geophysical Laboratory at the Carnegie Institution of Washington (USA), where his work focused on equilibria in hydrothermal systems. His influential work, along with that of George W. Morey and other experimenters, led later to the successful growth of synthetic quartz crystals (Fleischer 1986). Moving to the U.S. Geological Survey, Ingerson headed the Geochemistry and Petrology Branch for 11 years. While there, he not only maintained the USGS tradition of supporting fundamental research, he also led the survey into new fields, such as isotope geology and organic geochemistry (Fleischer 1986).

Ingerson was recruited to the University of Texas at Austin (USA) in 1958 at a time when the university was endeavoring to build a "truly eminent and distinguished faculty," thanks to his widely recognized reputation (Jodeit 1958; Alcade 1977). He served first as Professor of Geology and later as Associate Dean of the Graduate School.

In 1955, Ingerson realised that geochemistry was a rapidly growing and very active discipline and he saw the need for an overarching organization dedicated to bringing professionals together. Ingerson thus spearheaded the formation of the Geochemical Society, and served as its first president. The enthusiastic initial response – over 1,400 professional members from dozens of countries signed up within the first year – proved him right (Geotimes 1962). "Response to invitations to Charter Membership in the Geochemical Society has been most gratifying," Ingerson wrote in the first issue of Geochemical News (1956). "All of these are highly qualified professional individuals who are active in several different fields of science."

He was also active in the negotiations that created Geochimica et Cosmochimica Acta in 1950, served on its inaugural editorial board, and continued serving as an editor for its first 30 volumes – representing an impressive 144 issues. And he was a founding editor of the International Geology Review (Fleischer 1986).

As a researcher, Ingerson wrote nearly 200 scientific publications, including fundamental works on petrofabric analysis and geologic thermometry, supervised the translation of a prodigious number of Russian geological publications, presented papers in Spanish in Peru and Mexico, and published papers in Portuguese on Brazilian quartz deposits (Alcade 1977; Brantley 2007).

Among many accolades and honors, Ingerson was awarded the Day Medal from the Geological Society of America, the Distinguished Service Medal of the US Department of the Interior, an honorary DSc degree from his alma mater (Hardin- Simmons University), and was an honorary Life Member of both the IAGC and GS. Today, with more than 4,000 members from 67 countries, the Geochemical Society is still pursuing Earl Ingerson's mission of bringing together geochemists from around the world. 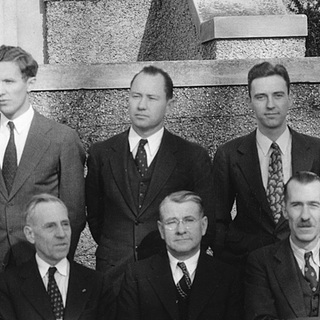