F.W. Clarke was a chemist who determined the composition of the Earth's crust. He has been called the Father of Geochemistry. 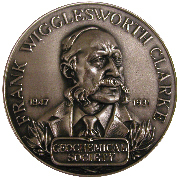 The F.W. Clarke Award is presented annually at the Goldschmidt conference.

The award consists of an engraved silver medal, an honorarium (US$ 750), and a certificate.

New for 2022:  The eligibility criteria for this award have changed. Age is no longer taken into consideration. The length of time since completion of a PhD is now seven years; previously it was six. The definition of an outstanding contribution has been broadened.

The F.W. Clarke Award honors a single outstanding contribution to geochemistry or cosmochemistry by an early-career scientist.

Outstanding Contributions may include:

Nominations of people from underrepresented groups are encouraged (e.g., women, non-white researchers and/or researchers from Asia, Africa and Latin America, disabled scientists, those who have led diversified careers, other historically minoritized groups, and intersections thereof).

To be eligible for this award, the candidate must have received a recognized doctorate or its equivalent within seven years of the first day of the year in which the award is given. Exceptions may be made for individuals whose career path has been altered by family, health, or other life challenges. An individual may not receive the Patterson Award, Clarke Award, and/or the European Association of Geochemistry’s Houtermans Award for the same body of work. Nominations from all fields of geochemistry are encouraged. (For 2023: Nominee must have received a PhD on/after Jan 1, 2016.)

Go to Make a Nomination for eligibility and nomination requirements.