It is with great pleasure that I have the opportunity to respond here to Professor Ros Rickaby's citation of me for the 2013 Goldschmidt Award. From reading the list of medallists since its initiation in 1972 I appreciate how distinguished is the company in which I find myself and this adds to the honour I feel, so generously and so originally presented by Ros. It is impossible for me to name all those, nominees, mentors, collaborators, students, postdocs, technicians who have led to this situation But what I can perhaps attempt is to highlight some points and people in my career that kept me pointing it the right direction.

I was a student with J.P. Riley and Roy Chester at Liverpool. What stuck most was the rigour of Riley's approach to analysis starting from my weighing aliquots of seawater to the elegance of the Murphy and Riley phosphate method. After a brief postdoc (without a PhD) at Imperial College London I gained a post as junior lecturer at Leeds University (also without a PhD) appointed by Robert Shackleton, the father of Nick, whose advice to me was to do what interests me. This led to my first paper in 1970 on Cr speciation in seawater.

Then (with a PhD) I spent a year or so at the University of Rhode Island initiated by Michael Bender, an extremely influential period for me. I met with Michael's students as well as John Edmond and, of course, Wally Broecker whose approach to science has been an inspiration for me. On return to Leeds I collaborated with John on hydrothermal plume chemistry but decided to focus on oceanic rare earth element chemistry culminating in my 1982 Nature paper with my co-author Mervyn Greaves and a number of other papers on REE and Nd isotopes.

Shortly afterwards I moved to Cambridge. Inevitably it led to Nick Shackleton. We published little together but Nick was an inspiration, helping me with Cenozoic marine Sr isotopes and, importantly, led me to palaeoceanography. I realised that my background in chemistry and geochemistry allowed me to exploit the chemistry of foraminifera. The initial result was three papers in 2000, two within a fortnight with my students: "Cd/P fractionation in seawater reveals higher surface water nutrients in the glacial Southern Ocean from planktonic Cd/Ca" in Nature with Ros Rickaby, "Cenozoic deep sea temperatures and global ice volumes" in Science with Carrie Lear and "Past temperature and δ18O of surface ocean waters inferred from foraminiferal Mg/Ca ratios" in Nature with Gerald Ganssen. This led to my focussing on ocean paleochemistry (although I found time to participate in a two-month cruise to study the hydrogeology of the oceanic lithosphere) and have worked to improve Mg/Ca thermometry and, importantly, develop B/Ca based estimation of carbonate ion with my student Jimin Yu. I have also slaved over a recent paper with Cambridge colleagues on the evolution of ocean temperature and ice volume through the mid-Pleistocene climate transition using the approach pioneered by Gerald and I ten years earlier.

By Harry Elderfield
Presented at the 2013 Goldschmidt Conference in Florence, Italy 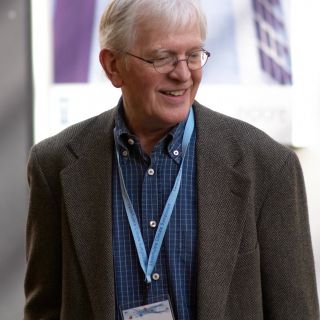