The term "geochemistry" had existed for 100 years when Victor Goldschmidt built upon technical developments of the time, as well as advances in physics and chemistry, to revolutionize the field by adding a theoretical underpinning to it, turning it into a mature science. Grossman (1993) expressed Goldschmidt's importance thus: "It is astonishing, even to experienced geochemists, just how many of the important concepts in this field originated with Goldschmidt". Goldschmidt's was an interdisciplinary approach: "The field of geochemistry," Goldschmidt wrote, "ranges widely over the broad ground of modern science, from astrophysics and nuclear and atomic physics to geology, oceanography, and biology..." (Goldschmidt 1954). We take a brief look at the life of this seminal figure.

Victor Moritz Goldschmidt was born in 1888 in Zurich (Switzerland) to a family of scientists of Jewish heritage. When his father was appointed Chair of Chemistry at the University of Oslo, the entire family moved to Norway. Victor was 13. He was drawn to nature in Norway, became interested in mineralogy, and profited from vacations in the countryside to study rocks. It is interesting that while traveling in Europe with his family in 1906, he saw a spectacular eruption of Vesuvius (Italy) and sent specimens back to his teachers.

When he entered the University of Oslo (Norway) his first research was on contact metamorphism in the Kristiania region of southern Norway. The results were published in 1911 in the classic monograph, Die Kontaktmetamorphose im Kristianiagebiet, which detailed the application of physical chemistry to metamorphic petrology.

At the unusually young age of 26 he became full Professor of Mineralogy and Petrology at the University of Oslo. He also became, in 1917, the director of Norway's Raw Materials Lab, dedicated to finding Norwegian sources of minerals that were in short supply due to World War I. As a result of this investigation into the chemical nature of economic minerals, Goldschmidt came to the study of crystal chemistry just at the time when new and powerful techniques for elucidating crystal structure, such as X-ray diffraction, were being developed. Goldschmidt used these techniques brilliantly and developed the new science of crystal chemistry (Mason 1992).

Beginning in 1922, he began establishing the conceptual basis for geochemistry. In his nine monographs—known collectively as the Geochemische Verteilungsgesetze der Elemente (Geochemical Laws of Distribution of the Elements), which he published between 1923 and 1938—Goldschmidt laid out the fundamental laws of geochemistry and crystal chemistry.

In 1929, he was recruited to the University of Göttingen (Germany); there, he built and staffed a mineralogical institute where he spent several highly productive years. During these years, he conducted research in geochemistry with an emphasis on problems relating to the distribution of the rare elements between the solid crust of the Earth, the atmosphere, and the hydrosphere. The study was later expanded to the broader problem of the absolute abundance of all elements in the Earth, planets, and universe (Johnson 1985). He was nominated for a Nobel Prize during this time, the first of 11 nominations.

The rise of Nazism interrupted this productive work. As a Jew, he knew that he could be dismissed from the university at any time, but he initially resisted leaving. The situation became increasingly oppres- sive, however, and he eventually saw the writing on the wall. That is not merely a rhetorical statement: a sign saying, "Jews not desired" was posted outside his office, and he reluctantly decided to leave. He resigned from the University of Göttingen in 1935 and returned to Oslo.

In Norway, he continued his research, publishing the ninth part of his Geochemical Laws, which he called his "Ninth Symphony." In it, he arrived at a table of cosmic abundances, from a combination of meteoritic and solar data, which provided the basis for later theories of the origin of the elements. "Goldschmidt's perception of the fundamental significance of meteorite compositions for geochemistry is another example of his scientific genius" (Mason 1992). This work provided the foundation for two later Nobel Prizes in physics to other scientists.

The dire world situation again intervened: Germany invaded Norway in 1940, and, in March 1942, all Jews in Norway were decreed to be "illegal immigrants." Twice he was arrested by the Gestapo; he was nearly boarded onto the prisoner ship Donau, but was pulled aside at the last moment and released thanks to the intervention of colleagues. The prisoners boarded that day were to be taken to Auschwitz, a concentration camp.

After this close call, he decided to flee with the help of the Norwegian Resistance. In December 1942, he and about 40 other refugees were smuggled over the frontier to Sweden.

In neutral Sweden, he was offered the chair of mineralogy at Uppsala University but he was determined to help in the war effort and decided to go Britain, where he felt that his knowledge of technical developments in Norway would be of value to the Allies. During his years in Britain, he worked on his Geochemistry opus, as well as lecturing extensively. He received many honors during this time: he was named a Foreign Member of the Royal Society in 1943, and, in 1944, he received the Wollaston Medal, the highest honor of Geological Society of London.

He returned to Oslo in 1946 but his health, never strong, had suffered greatly during the war. He died in March 1947 at the age of 59 from a cerebral hemorrhage.

At his death, he left his comprehensive treatise, Geochemistry, in draft form; it was completed by Alex Muir and published in 1954. It made Goldschmidt's work known to an English-speaking audience and became the standard text on geochemistry for many years (Glasby 2006).

According to his biographer, Brian Mason, "Goldschmidt's insight and intuition, his ability to plan and expedite extensive research programs, and not least his recruitment and inspiration of devoted research associates, revolutionized geochemistry" (Mason 1992). The Geochemical Society named its highest award, the Goldschmidt Medal, to recognize him.

In 1988, one hundred years after he was born, the first Goldschmidt Conference was held in Baltimore, Maryland (USA) and was attended by 463 geochemists. The program stated, "It is the intent of the participating societies that there should be a continuing series of conferences under this distinguished name." That wish has been fulfilled. Goldschmidt Conferences, organized by the Geochemical Society and the European Association of Geochemistry, have grown to be the premier meetings in geochemistry. They are now attended by some 4,000 scientists annually. 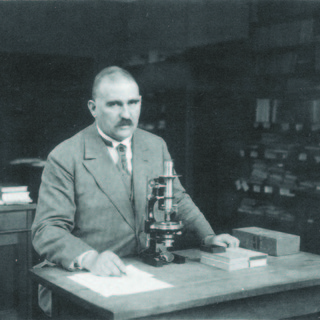 V.M. Goldschmidt sitting in his office in the Mineralogisk-Geologisk Museum in Oslo in the 1920s.