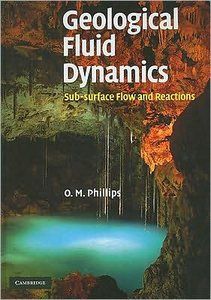 The book Geological Fluid Dynamics by O.M. Phillips provides an excellent reference for researchers and professional working on environmental problems involving groundwater flows, especially flows at large spatial scales that are incited by natural forcing functions. The author presents background material from a very fundamental perspective using physical and mathematical arguments. The book is presented in six chapters consisting of 1) Introduction, 2) Basic Principles, 3) Patterns of Flow, 4) Flows with Buoyancy Variations, 5) Patterns of Reaction with Flow, and 6) Extensions and Examples. The Introduction chapter lays out the approach used in the book and summarizes the topics given in each of the subsequent chapters.

The Basic Principles chapter describes the properties of porous media, the fundamental properties of porosity and permeability, the conservation of mass principle, the stream function, derivation of Darcy's equation, the buoyancy term in the expression for the total potential, the thermal energy balance and chemical balances. A unique feature of this book is that it presents two theorems established by Helmholtz, the uniqueness theorem and the minimum dissipation theory, both of which play important roles in describing phenomena involving flow in porous media.

The chapter on Patterns of Flow describes flow phenomena in both homogeneous and heterogeneous geological formations. It presents the Laplace equation and provides a list of properties of the equation that are directly translated into practical terms. Regional groundwater flow processes are described qualitatively and applications of the Laplace equation to solve for flow patterns are presented. The effect of random heterogeneity of permeability on the flow patterns and ultimately the hydrodynamic dispersion is discussed and analyses given and related to predictions of hydrodynamic dispersion estimated from field scale experiments like the well-known Cape Cod field tracer experiment. The interaction between flows in matrix blocks and adjoining fractures is analyzed to quantity the nature of the flow field as well as solute transport distribution. The chapter ends with a discussion of pressure transients in porous media, either matrix, or media composed of matrix and fracture elements.

The Flows with Buoyancy Variations chapter deals with flow driven by gradients in fluid density brought about by either temperature gradients or salinity gradients. Thermal gradients could arise for instance from the natural geothermal gradient or from buried repositories of radioactive wastes. Salinity gradients can occur for instance when saline water is introduced over the top of fresh water. The author clearly explains that for these flows the uniqueness theorem discussed in chapter 2 does not apply because many different solutions are possible when flow circulations or flow instabilities are involved. The degree of buoyancy is quantified by the Rayleigh number for either thermally driven flows or salinity driven flows. A number of applications are presented for submerged banks and for sloping layers where thermal gradients drive circulations. Salinity driven flows are shown for freshwater lenses and for the phenomenon of gravity currents. Flow instabilities (Rayleigh-Darcy instabilities) caused by thermal gradients and salinity gradients are also discussed in detail. A section is also presented on the unstable flow that can occur when a more dense fluid invades a medium saturated with a less dense fluid.

The chapter on Patterns of Reaction with Flow provides a detailed account of the processes of chemical reactions during the movement of a fluid in porous media. The reaction processes can lead to deposition/precipitation of a chemical on the solid surface, or dissolution of a chemical from the solid surface, or both. The flow pattern is treated as mediating the reaction processes, and three main reaction scenarios are considered: reaction fronts, gradient reactions and mixing zones. The possible alteration of the solid matrix porosity and permeability due to either deposition or dissolution of reactants is considered. Descriptions of field scale reaction phenomena are presented including one that could take place on the time scale of a few years, and another associated with the formation of mineral deposits that are estimated to take tens of millions of years to complete.

The last chapter appears to be more of an appendix than a chapter. It consists of only a few pages with some extra references and a few problem descriptions that end as sample questions to be solved by the reader.

One aspect of the book that was particularly refreshing is that it does not focus on the use of numerical methods for solving the flow and transport equations. Instead it provides quantitative arguments for the significance of particular terms in governing equations and relations, and also provides the derivation of analytical solutions when desired for describing flow and transport phenomena.

Numerous reference books and textbooks exist that cover the topics of flow and transport processes in groundwater systems. Dr. Phillips' book is unique and might become a classic similar to Jacob Bear's Dynamics of Fluids in Porous Media. It certainly should be is a valuable addition to the library of any research or practitioner serious about the processes of flow and reaction transport in geological settings.