"A giant among geologists, Darashaw Nosherwan Wadia was a great visionary who not only shaped our understanding of the geological making of the Indian subcontinent but also set the national agenda of geological activities when India won freedom." --K. S. Valdiya

"Fortunately for India, it found in Wadia an eminent geologist of its own, who would enthuse generations of Indian geologists. To say that he was energetic and hardworking is perhaps an understatement; one found clambering up and down the Nanga Parbat area of the Himalayas, at the height of twelve thousand feet, when he was fifty." --Biman Nath

Darashaw Nosherwan (D.N.) Wadia was born in October 1883 in Surat in Gujarat State but in 1894 the family moved to Boroda (also in Gujarat State) in order to get a better education for their son. He attended first a private Gujarati school and then the Sir J.J. English School and it was there that he got his love of science and devotion to knowledge. At the age of 16, Wadia went to Baroda College, then part of the University of Bombay. He took a B.Sc. degree in Botany and Zoology in 1903 and a second B.Sc. degree in Botany and Geology in 1905 (Stubblefield 1970). At that time, geology was only taught in Calcutta and Madras. Wadia was therefore largely self taught as a geologist!

In 1907, at the age of 23, Wadia had the good fortune to be appointed Professor of Geology at the Prince of Wales College in Jammu in the southernmost part of the State of Jammu and Kashmir (Stubblefield 1970). He stayed there until 1921. From there, he could already set his eyes on the distant Himalaya. There is no doubt that his early life amongst the mountains of Kashmir provided inspiration for much of his later work on the structure and stratigraphy of the North-West Himalaya (West 1965, P. 2).

Wadia's main task as a lecturer in Geology was preparing the students for the Punjab University Examinations. However, he experienced great difficulty teaching the geology of India because of the lack of suitable textbooks. He therefore took the extreme solution of writing his own. The first edition of The Geology of India for Students was published in 1919 and the sixth edition, The Geology of India, was published in 1966. The Geology of India is a remarkable book. The sixth edition is 536 pages long and divided into three main sections, the first, relatively short, on the Physical features of India, the second a huge contribution on the stratigraphy of India from the Archaean to the Pleistocene and Recent and finally a relatively short section on the Economic Geology of India. This book had a profound influence on generations of students of geology in India and is still in use today (West 1965).

During his time in Jammu, Wadia used to take his students on adventure trekking and investigative field trips in the Siwalik Hills of the Jammu region. Among the fossils he collected during these years were a 10 ft-long long tusk and skull fragments of an elephant-like mammal, Stegedon ganesa, which he found in the Upper Siwalik Formation six miles north of Jammu (Stubblefield 1970; Vygyan Prasar undated). In 1928, Wadia subsequently identified a skull of Actinodon risinensis, collected from the Lower Gondwana beds near Zewan in Kasmir (West 1965). These two fossil discoveries were of great import (Thakur 2003).

In 1920, the Geological Survey of India received authority to increase its compliment of scientific officers from 20 to 32. Wadia was appointed to one of these positions at the relatively late age of 37 in 1921. He was the first Indian to be appointed to the GSI whose degrees came from an Indian university (Stubblefield 1970). At that time, the GSI was resuming its mapping in the Himalaya in some areas where topographic maps at one inch to the mile had become available. Wadia began his career at the GSI by mapping 2000 square miles of the mountainous Poonch State in the Lesser Himalayas and an additional 2100 square miles in the adjacent parts of the Punjab. This formed the basis of his first substantial memoir for the GSI in 1928 (Wadia 1928). One of the principal findings of this study was his explanation of the unique knee bend of the mountain chains around the knot called Nanga Parbat as the result of the interaction of the Himalaya with the the tongue like projection of the Archaen Shield (West 1965; Stubblefield 1970; Thakur 2003) (Fig. 1; Thakur 2003, P. 71). The tectonics of the Nanga Purbat Syntaxis has recently been the subject of a Memoir of the Geological Society (Khan et al. 2000). For this work, Wadia was awarded the Back Award of the Royal Geographical Society in 1934 and the Lyell Medal of the Geological Society in 1943 (West 1965).

In 1930-31, Wadia continued his mapping of the high ground around Nanga Parbat (peak at 26,620 ft) with only old ½ and 1 inch topographic maps available to him (West 1965; Stubblefield 1970). He described the mountain as ‘a peak of arresting grandeur...It's southern flank exposes a rock face whose butteressed cliffs, 12,000 ft high pierce the sky almost in in one leap'. The surrounding slopes were concealed under many square miles of uninterrupted snow fields. Wadia described the Nanga Parbat mountain mass, the central and most commanding feature of the whole district as above 15,000 ft and ‘almost inaccessible to the single field geologist, unequipped with elaborate mountaineering outfit, parties of carriers, etc.' (Thakur 2003). However, Wadia was able to deduce the geology of the higher parts of the mountain above the snow line by examining the moraine deposits. On this basis, he considered the geology of the mountain to be ‘rather simple' to which his director replied that it must be rather pleasant to possess the philosophical temperament to regard this complexity as simple (Stubblefield 1970). Nonetheless, field work in this barren area undertaken at the age of 50 would have required great tenacity from him (West 1965).

During his time at GSI, Wadia was also able to extend his studies on vertebtrate fossils from the Siwalik strata of the Potwar and Kashmir at the British Museum from 1926-1927 and to visit geological institutions in Germany, Austria and Czechoslovakia (Stubblefield 1970). He also attended the 3rd International Congress of Soil Science in Oxford in 1938. In 1937, he contributed two papers on the tectonic relations of the Himalayas with the North Indian Foreland and on the palaeogeography and climate during the Permo-Carboniferous at the International Geological Congress in Moscow, although he was unable to attend in person. In 1938, he also published a catalogue of fossil primates discovered in the Tertiary deposits in India (West 1965).

Wadia's contribution to the soil science in India was very significant (Vygyan Prasar undated). Wadia not only noted the neglect of soil science in India but also showed the way for improvementa in his own writings. In 1935 Wadia, jointly with M. S. Krishnan and P. N. Mukherjee, published the first soil map of India. This was published by the GSI and paved the way for later soil maps. Wadia's work therefore had considerable bearing on agricultural development in the country. He represented India at the 3rd International Congress of Soil Science held at Oxford in 1935 and also participated in an excursion arranged by the Congress to study the soil profiles in England, Wales and Scotland.

In 1938, Wadia reached the retirement age in the GSI (55). In that year, he gave the Presidential Address to the Geology Section of the Indian Science Congress during its Jubilee Meeting in Calcutta (Stubblefield 1970). He also provided a chapter dealing with geology and geography to the Congress Volume entitled Progress in Science during the last twenty-five years and gave a president's address on the Himalayas to the Geology Section.

On his retirement from the GSI in 1938, Wadia accepted an offer from the Government of Ceylon to become its Government Mineralogist. His main recommendation was that a systematic survey of the island should be undertaken in order to prepare an accurate geological map of the island. This work was impeded by the lack of qualified staff. However, he managed to produce a number of reports to the government on water supply, peat, glass sands, gem gravels and minerals of economic value (Stubblefield 1970). He also produced accurate geological maps of the island and geological investigations concerning water supply, dam-sites and other engineering projects (Vygyan Prasar undated).

Wadia's first wife had died in the 1930s and in 1940 he married Meher Medivala in Colombo in 1940. She was a mineralogist and graduate of the University of Bombay and was to be his constant companion for the rest of his life. She was an established scientist in her own right and published a book on Minerals of India in 1966 (Mrs. Meher D.N. Wadia 1966).

In 1942, Wadia became General President of the Indian Science Congress. At the 1943 meeting of the Congress in Calcuta, Wadia spoke on ‘Minerals' share in the war' (Wadia 1943). He pointed out that this was the first time in the 4 milleniums of India's recorded history that the enemy has assaulted the eastern frontiers of the country and reported on India's response to the invaders, through its munitions factories, its electric, chemical and technical plants and industrial research laboratories. He also pleaded for a justly planned international mineral policy to preserve peace and goodwill among countries (Stubblefield 1970). This speech, published in Science, was an impressive contribution in the time of war.

In 1945 Wadia was appointed the Geological Advisor to the national government of Jawaharlal Nehru to initiate and formulate a mineral policy for India (Vygyan Prasar undated). He realized that the estimates of raw mineral resources needed reassessment (Stubblefield 1970). Following Independence in 1947, supplies of some minerals (salt and gypsum) were indeed found to be in short supply with the passing of territory to Pakistan. In 1947, he announced the setting up of a Mineral Advisory Board to advize on mineral development. In 1948, Wadia became the first Director of the Indian Bureau of Mines assisted by two officers. The Bureau drafted the Mines and Minerals Act (1948), the Mineral Concession Rules (1949 and the Petroleum Concession Rules (1949). In 1949, Wadia left the Bureau to serve on the Atomic Energy Commission.

In 1948, Wadia attended the International Geolgical Congress in London and presented a paper on the fluviatile sediments of NW India (Stubblefield 1970). In his capacity as head of the Indian delegation, Wadia also conveyed an invitation on behalf of ther Indian Government to host the XIX Congress in New Dehli to coincide with the centenary of the formation of the GSI. However, the conference went to France and it was not until 1964 that India was able to host the IGC the XXII International Geological Congress in Dehli with D.N. Wadia as President.

In addition, the Indian Atomic Energy commission had been set up in 1948 and Wadia was appointed to guide the work on the Commission's Raw Materials Division. This division grew under him into a ‘well-knit unit of 470 geologists and geophysicists, mining and drilling personnel'.

In 1963, Wadia gave the Meghnad Saha Lecture on The Himalaya Mountains: Their age, origin and sub-crustal relations in which he essentially summarized his ideas on the formation of the Himalaya developed over a life time (Wadia 1963).

In 1965, the D.N. Wadia Commemorative Volume consisting of 60 separate articles was published in Wadia's honour by the Mining, Geological and Metallurgtical Institute of India (Jhingran 1965).

Wadia was a field geologist through and through. For months on end, he would leave his camp at day-break for a good 20 miles traverse on foot in trackless mountain or on a much longer ride on mule or horse back, a late lunch his first meal of the day. With the passage of years, work became tantamount to life itself (Stubblefield 1970). ‘The best work is done with the least amenities' was his favourite dictum. He died on June 15, 1969 at the age of 86. He was without doubt the best India has produced. 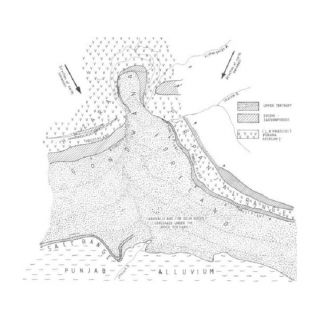 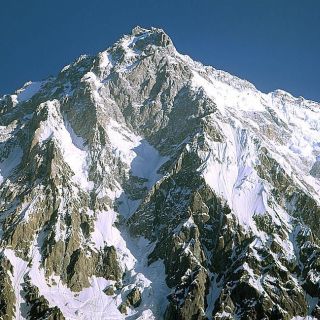 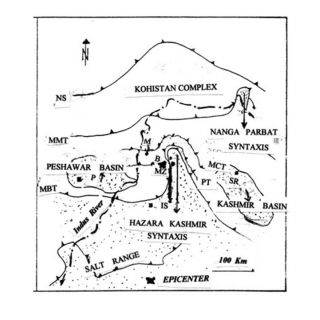 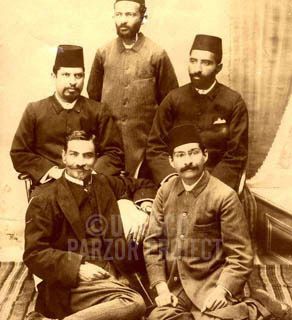 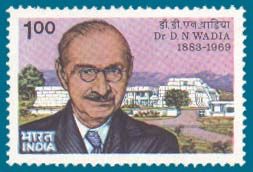 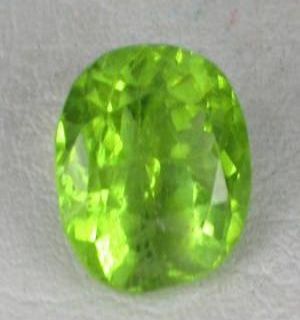 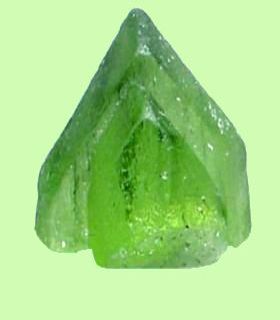 Letter from the President (#138)
by Martin Goldhaber

Bench-top micro-XRF - a useful apparatus for geochemists?
by Thilo Behrends and Pieter Kleingeld

D.N. Wadia and the Geology of the Himalaya
by Geoff Glasby