Marilyn L. Fogel, Professor Emerita at the University of California, Riverside (USA), will receive the 2022 Victor M. Goldschmidt Award. The Goldschmidt Award is the society's highest honor, presented annually for major achievements in geochemistry over a career. Dr. Fogel revolutionized the use of stable isotopes in ecology, geochemistry, and cosmochemistry. Her research ranges from stable isotope fractionation in photosynthesis, to tracking the anthropogenic impact of the colonization of Australia, to the understanding of cosmochemical processes in meteorites.

Yige Zhang, Assistant Professor at Texas A&M University (USA), will receive the 2022 F.W. Clarke Award this July. The Clarke Award recognizes an early-career scientist for a single outstanding contribution to geochemistry or cosmochemistry published either as a single paper or a series of papers on a single topic. Dr. Zhang is recognized for his contributions to the application and refinement of lipid biomarker proxies for paleotemperature and atmospheric CO2 reconstructions, including development of the "Methane Index" and "Ring Index". 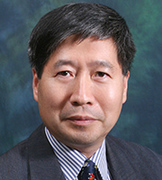 Xiangdong Li will receive the 2022 Clair C. Patterson Award, which recognizes an innovative breakthrough of fundamental significance in environmental geochemistry, particularly in service of society, consisting of either a single outstanding contribution or a short series of papers published within the last decade. Prof. Li holds the positions of Dean of Faculty of Construction and Environment, Director of Research Institute for Sustainable Urban Development, Chair Professor of Environmental Science and Technology, and Ko Jan Ming Professor in Sustainable Urban Development at The Hong Kong Polytechnic University. He is recognized for his innovative and dynamic work in environmental biogeochemistry, including research in the fields of regional contamination, urban air PM2.5 pollution, and the origin and dissemination of antimicrobial resistance.

Carbonatites are rare, but important, igneous rocks in the Earth’s crust. They are composed of Ca, Mg, and Fe carbonates, along with many minor and trace components. The majority of the world’s rare earth elements—which are essential for high-tech devices—are associated with carbonatites. This issue explores how carbonatites form and evolve in the mantle or crust, the temporal and tectonic controls on their formation, why they are enriched in rare earth elements, and their economic significance.

Professor William S. Reeburgh, known to friends and colleagues as Bill, died in July. He was a Geochemistry Fellow and active supporter of the Geochemical Society for many years. He and his wife, Carelyn, established the Endowed Biogeochemistry Lecture in 2016 and it is now an important part of the annual Goldschmidt Conference.

Born in 1940 in Port Arthur, Texas, Bill received his B.S. in chemistry from the University of Oklahoma and a Ph.D. in oceanography from Johns Hopkins University. He was professor and chair of Marine Science at the University of Alaska, Fairbanks for many years. In 1993, he moved to the University of California, Irvine as a founding professor of the university's Department of Earth System Science.

According to a press release from UCI:

"Bill Reeburgh's research contributed enormously to our understanding of the global methane cycle, and it was once said that he was to methane what Dave Keeling was to CO2. He recognized that methane entering the atmosphere and oceans represents the small imbalance between very large methane production and oxidation sinks resulting from microbial activity in sediments and soils. He demonstrated an important new sink mechanism for methane in oxygen-free environments, but had to convince skeptical microbiologists, as no microbe had then been discovered with this metabolism. To do this, Bill used what he called "the 3R's" – documenting routes, reactions and rates by combining tools ranging from sediment reaction-diffusion modeling, isotope labeling and stable isotope distributions to build an incontrovertible case. Many of the measurements came from favorite field sites in Skan Bay, Alaska and the Black Sea."

His important contributions to the fields of biogeochemistry and global elemental cycling were recognized by the GS and EAG in 2018 when Bill was named a Geochemistry Fellow. He was also a fellow of the American Geophysical Union, the American Academy of Microbiology and the American Association for the Advancement of Science.

Bill and Carelyn were married for 54 years and raised three children together. On retiring from UCI, Bill moved to Vancouver, Washington where he enjoyed woodworking, spending time with his six grandchildren, and serving on various scientific advisory committees, including the GS Strategic Planning Committee.

Bill will be missed by his many friends and colleagues in the Geochemical Society. But his and Carelyn's generosity will be felt long into the future as the Endowed Biogeochemistry Lecture continues to recognize innovative science in this field.

The Geochemical Society has planted a tree in memory of Bill Reeburgh. You can also plant a tree in his name.

Fred Frey passed away on September 13, 2021 at 83 years of age.  For over 50 years, Fred worked to build our understanding of the chemical composition of the Earth’s upper mantle and the generation of magma through mantle partial melting.  He sought to understand the processes that lead to the diverse trace element and isotopic compositions of mantle rocks and mantle-derived magmas.  Fred’s research was unique in that it encompassed two approaches to this understanding: direct study of mantle xenoliths and tectonically emplaced mantle rocks and the complementary study of magmas generated in different tectonic settings - at mid ocean ridges, oceanic islands, and subduction zones.

For over half a century, the structural details and the dynamics of atomic arrangements in materials have been determined using neutron-based scattering and absorption measurements. Neutron scattering experiments have contributed valuable information on geological materials and how these interact with fluids. In situ studies of transformations and fundamental properties can emulate diverse environments from Earth’s surface to its deep interior. Potential growth of the “neutron community” is being realized with the development of new and improved neutron sources. This issue will familiarize the reader with the basic concepts of neutron scattering, the methods that are available to Earth scientists, provide a summary of facilities around the world, and give key applications of the technique.

Recognizing a Broader Spectrum of Achievement

Excellence in geochemistry can be defined in many ways. Of course, this includes publication of novel discoveries, but it also includes teaching, capacity building, influencing policy making, science communication, and much more. Recognizing this, the Geochemical Society has broadened the definition of excellence we use in many of our award criteria.

The GS is also committed to increasing diversity in geochemistry and among its formally recognized inspirational and prominent figures. We seek to promote and encourage diversity and inclusion while furthering equity, a true sense of belonging, and success for all people. In particular, the society is keen to encourage talented researchers from underrepresented groups to serve as nominators and to be nominated for society awards.

Everyone in the geochemistry community is invited to participate in this process. Check out this list of frequently asked questions, which helps to demystify the process.

To submit a nomination, get started by reviewing the list of awards and their criteria. Nominations for our awards and special lectures are due by October 31.

GS to Add Early Career Members to its Board of Directors

Students, postdoctoral scholars, and other early career scientists form a crucial segment of the Geochemical Society's membership. To make sure that we consider the needs of this population, the society is adding two new seats on its board specifically for early career researchers (ECR). The board is responsible for governing the organization and determining how our programs can best serve the international geochemistry community. Serving on the board is an opportunity to develop as a leader, meet colleagues from around the world, and make a real contribution to the society and larger community.

Early career scientists may self-nominate or be nominated by others for this role by August 20, 2021.

Stalagmites, stalactites, and flowstone—collectively known as speleothems—are some of the most fantastic mineral features in nature. Speleothems are also critical archives of past environments, and their study incorporates expertise from groundwater hydrogeology and geochemistry, atmospheric chemistry, climate science, geobiology, and even geophysics. Research on speleothem trace element and isotopic geochemistry, constituent organic compounds, noncarbonate minerals, and morphology can help illuminate paleoenvironmental conditions and document historical anthropogenic land-use changes. This issue of Elements introduces the many ways that speleothems are used within the geoscience community to learn about natural Earth processes and our role in modifying them.
Current Geochemical Society members can access this issue now via the Elements website using your email address (UserID) and member number (Password).
Category: Society News
Tag: Elements Magazine